17 Acres Of Barren Land Now Flourishes With Rice & Apples, Thanks to 66-YO Farmer 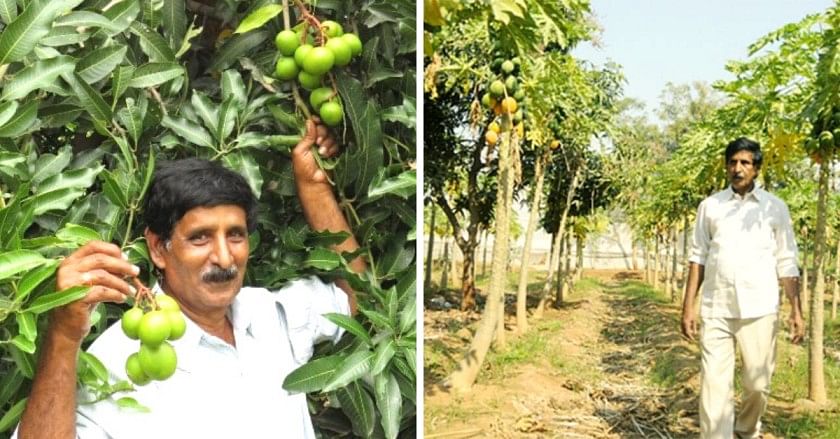 Gudivada Nagaratnam Naidu and his wife, Satyavathy hailing from Hyderabad were comfortable with their well-paying stable jobs in an electronic goods firm but were struggling to find a sense of purpose with their lives. In 1989, the couple took a drastic decision to leave their jobs behind and start a career in farming. Naidu and his wife bought 17 acres of barren land near a quarry field in Taramathipet village, about 25 km from Hyderabad.

In a span of six years they converted 17 acres of land into a lush organic farm with 5 acres set aside for paddy and almost 20 varieties of fruits, pepper, cardamom and even coffee.

The couple earns close to a lakh from Nagaratnam Naidu Farm every month.

Reaching For The Roots in the Land

Born in Balakrishnapuram village in Chittoor, Andhra Pradesh, Naidu studied electronics in a polytechnic college and up until 1989 was working as a service engineer at an electronic goods firm along with his wife Sathyavathy who worked in the same firm as an office assistant.

“At this point in time, we were happy with the income we were getting and had enough savings as well but we wanted to get back to our roots and invest our time in something more meaningful like farming,” explains 66-year-old Naidu. 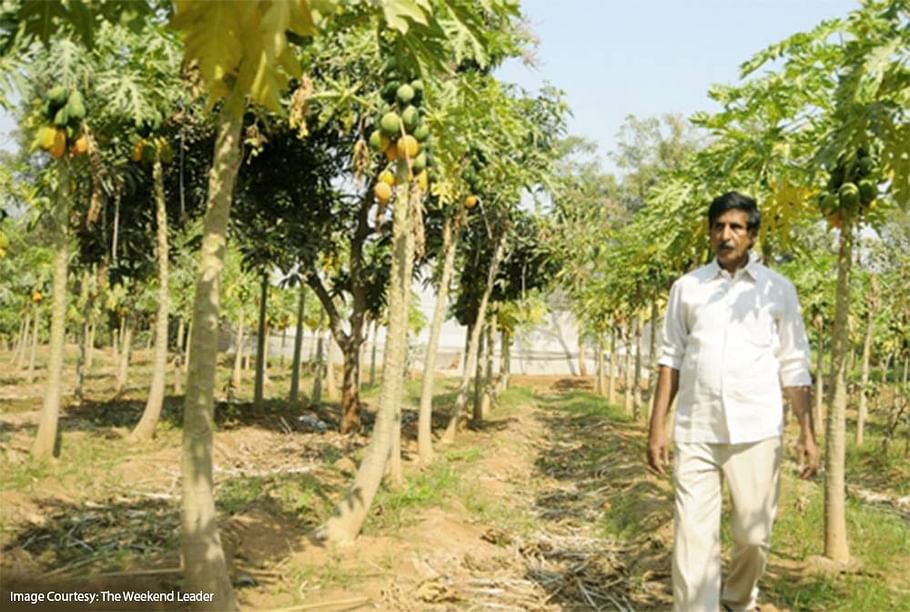 When he consulted with friends and family regarding this change, they naturally asked them to stick on to their jobs.

“Even with regard to the land that we were planning to buy, they said that it would be impossible to cultivate plants on the rocky terrain,” he adds.

But a determined Naidu and his wife went ahead with their decision and bought the land in Taramathipet. For six years, the couple lived on their savings and began preparing the land for cultivation.

“Besides the land, our first investment was the purchase of two cows. We used the dung from the cows to prepare the land for cultivation,” explains Sathyavathy. 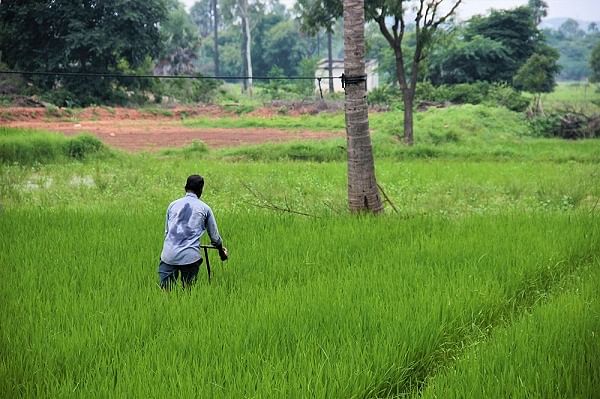 Naidu first started out by cultivating one acre of land and then later expanded into paddy cultivation when he learnt about the System of Rice Intensification technique (SRI), used to increase the yield of rice in farming.

“This technique was an eye-opener for me because I had always believed that paddy cultivation wouldn’t produce the expected yield. Another thing is something that I keep telling my fellow farmer friends. We should never plant paddy deep into the soil. All you have to do is place it on the soil and allow its roots to search for water. If they are planted at the right distance, the roots will search for water on its own and will also absorb the micronutrients it needs,” he adds.

Although conventionally 20 kg of seeds is used per acre for paddy, only 2 kg of seeds is required in the SRI method. Using this method, Naidu has cultivated almost 5 acres of paddy and has doubled his yield, getting upto 90 bags of rice every year.

“If I had focussed on paddy alone, I would have been bankrupt. That’s why I adopted mixed farming. When a drought season is coming up, I drop the paddy cultivation for that year and cultivate something else. Besides the fruits and vegetables, I also grow upto 20 varieties of flowers which are sent out to the Bengaluru markets,” he adds.

Naidu grows several fruits such as papaya, guava, banana, seven varieties of mangoes, Indian blackberries, coconuts and even apples! He has also cultivated a variety of vegetables like tomatoes, ladies finger, brinjal, beans and even green chillies. 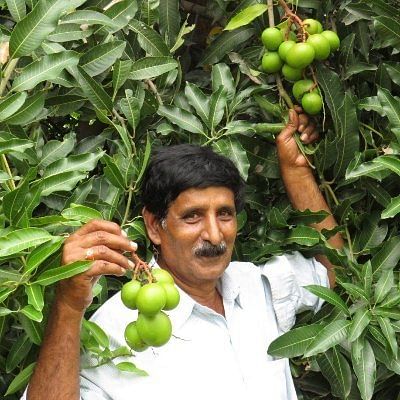 Harvesting the bounties of the land

Today Naidu earns upto a lakh every month from his farm and manages 12 employees. Besides the plants, Naidu has also expanded into dairy and poultry farming and has around 12 cows and a few chicken and geese on his farm.

“I had complete faith in the farm from the very beginning and today it stands testimony to my husband’s determination. Although our house is in Dilshuknagar, Hyderabad, my husband travels to Taramathipet every day to take care of the farm and I occasionally accompany him. Besides farming, we also conduct farming classes for villagers and students from various schools,” Satyavathy explains. 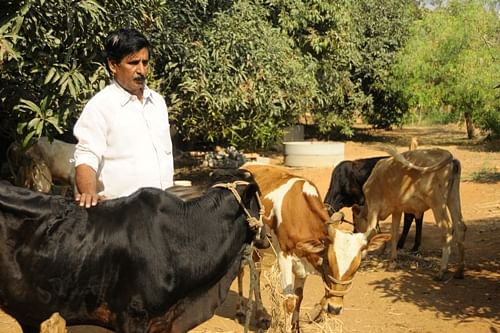 Sura Dasidhar, an entrepreneur based in Hyderabad who visited the farm in 2018 as part of a field trip explains, “It was a surreal experience for me to see the Nagaratnam Naidu Farm. On the way to the farm all you can see are rocky plains and drylands. When you reach the farm it comes as a surprise that there is so much greenery amidst all of this.”

Nagaratnam Naidu Farm received a lot of recognition for its amazing harvest. The former Chief Minister of Andhra Pradesh, Late Y.S. Rajasekhara Reddy on visiting Naidu’s farm arranged for specially tarred roads leading up to the farm so that more people could have access to see it. 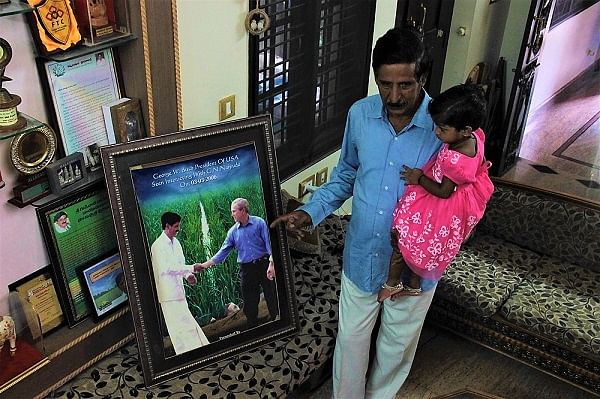 Picture of G.N. Naidu meeting Former US President George W. Bush on his visit to Hyderabad.

Naidu’s agrarian methods and techniques have inspired several farmers in and around the country to bring about a change in their cultivation techniques as well.

For his contributions, Naidu has also received the award for the best SRI farmer from the World Wildlife Fund (WWF) in 2010, in collaboration with the International Crops Research Institute for the Semi-arid Tropics, Hyderabad for his efforts in promoting the SRI technique among farmers.

“I have not used any amount of chemical pesticides or fertilisers in my cultivation and have maintained it to be completely organic. This is a part of my philosophy and I firmly believe it is the reason why I have been able to get a good harvest for the past 31 years,” he concludes.