216 cr COVID jabs to be available in 5 months between August-December, enough to cover all: Centre 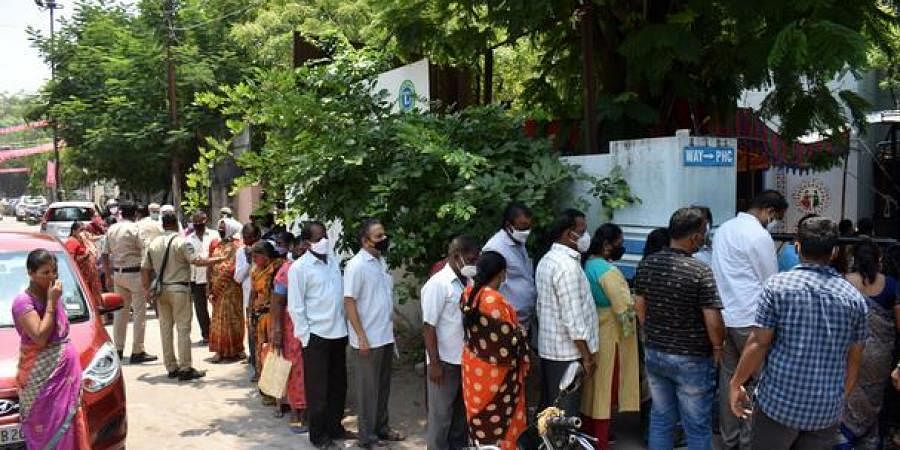 People line up for Covid-19 vaccine at a PHC in Hyderabad. (Photo | S Senabgapandiyan, EPS)

NEW DELHI: As states grapple with a shortage of coronavirus vaccines, the Centre Thursday said that over two billion doses will be made available in the country in five months between August and December, enough to vaccinate the entire population.

With the domestic supply falling short to meet the huge demand, several states and Union Territories including Delhi, Maharashtra, Karnataka and Telangana have decided to opt for global tenders for procurement of anti-coronavirus shots.

Acknowledging the crunch, Paul said vaccines are important “but it takes time” to produce and make them available.

“We are passing through a phase when supply is finite.” “This is why we prioritised. Which is why (when) free vaccines were given by the government of India, their focus was on vulnerable age groups.

We have to keep this mind,” he said at a Health Ministry briefing.

However, the officer said that by the end of the year there will be enough vaccine doses in the country to inoculate the entire population.

“Over two billion doses will be made in the country in five months (August to December) for India and for the people of India.

Vaccine will be available for all as we move forward,” Paul said, adding that the number is likely to be ramped up to three billion by the first quarter of the next year.

He said that the estimated 216 crore doses that are likely to be produced between August and December include 75 crore doses of Covishield and 55 cores doses of Covaxin.

On the procurement of vaccines from Pfizer, Moderna and Johnson & Johnson, Paul said the government is in touch with these firms through the Department of Biotechnology and the Ministry of External Affairs.

“We asked formally whether they would like to send doses to India, manufacture in India, we will find partners.

They said they will talk about vaccine availability in Q3 (quarter 3).

We have intensified this process with Moderna, Pizer and J&J and we hope they will come forward,” Paul said.

“This is happening at the highest level,” he stressed.

“We invite (them). They make vaccines here, make it with our companies through technology transfer.

Under the new strategy, that channel is open and we will support in every possible way,” he said.

On vaccination drives in other countries compared to India, Paul cited the examples of the US, Germany and France where the entire population has not received the single dose of vaccine yet.

The government has already said that India is the fastest country globally to reach the landmark of administering 17 crore doses in 114 days.

Many opposition-ruled states have been opposing the policy which mandates them to procure vaccines, nationally and internationally.

Opposition states chief ministers too have been demanding free vaccines for all.

Delhi Chief Minister Arvind Kejriwal said the fact that the states are “left to fight” with one another in the international market for Covid vaccines portrays a “bad” image of India.

“Indian states left to compete/fight with each other in international market. UP fighting Maha, Maha fighting Orissa, Orissa fighting Delhi. Where is ‘India’? Portrays such a bad image of India. India, as one country, shud procure vaccines on behalf of all Indian states (sic),” the Aam Aadmi Party (AAP) supremo said in a tweet.

Replying to such criticisms, Paul said, “States wanted flexibility. It (the vaccination policy) was in that response.

There was also a demand that there should be (availability of doses) in the private sector,” he said.

“Any vaccine that is approved by the WHO, FDA can be imported to India. They can get an import license in two days. Who is stopping them?” he added.

He said that so far 35.6 crore vaccine doses have been either procured or are in the process of procurement by the Centre.

Under phase II, 12 crore (10 crore Covishield and 2 crore Covaxin) doses are being procured, he said, adding of these, 86 per cent doses have been received while the rest are expected by the end of this month.

Under phase III, he said, 16 crore (11 crore Covishield and 5 crore Covaxin) doses are being procured.

The supply for these doses will begin from May 21 and continue through July.

Separately, 16 crore additional doses are in the pipeline which are being procured directly by the states and private hospitals, he said.