Meet the 16-year-old founder of Swadeshi Tech, which lets you find replacements for Chinese apps

Chirag Bhansali, a 16-year-old student from Delhi Public School in Noida, was heavily inspired by Sonam Wangchuk’s viral video Cheen Ko Jawab, where he made an appeal to Indians to boycott Chinese goods.

Wangchuk has been a household name after inspiring Aamir Khan’s character in the Bollywood film 3 Idiots (2009). The Ladakh-based engineer, innovator, and education reformer posted the video on his YouTube channel on May 28, almost pre-empting the Government of India’s ban on 59 Chinese apps.

The video has garnered nearly 4.3 million views, and inspired several people to hunt for local alternatives. Chirag, a Class 11 science student, is one.  He’s a self-taught coder and web developer, who’s taken online lessons on Udemy and YouTube. In Class 7, he had built the school website, and later, created an app for exchanging books. Chirag was also the runner-up at Adobe Creativity Challenge 2019 for product designers, and a participant at Google Code-In 2019 for developers.

The teen techie tells YourStory, “I started building my website in the first week of June after being inspired by Wangchuk’s video. I tested it with a few people, and launched the site on June 12.”  His website, SwadeshiTech.in, is a tool to search for alternatives of Chinese apps and products. It went live a fortnight before the ban.

Swadeshi Tech’s first few hundred users started trickling in as Chirag spread the word through his own social media channels. He would tag industrialists, techies, entrepreneurs, and even Wangchuk to promote the platform. But come June 29, and Swadeshi Tech would have its ‘tryst with destiny’.

In less than a week, the website recorded 1.2 lakh unique users, and clocked about 1.5 lakh sessions. Users spend 90 seconds on an average on the site, and new users are added each day. A mobile app is also in the works now.  Chirag says, “Some people don’t like downloading new apps, but they are okay searching for something on a website. That is why we went web-first.”  He was assisted by his friend Arghya Shubhshiv (a 14-year-old student of DPS) in the development of the platform. Arghya is the co-founder now.

What to find on Swadeshi Tech

Swadeshi Tech is intentionally barebones with only two use cases. It is designed in shades of the Tricolour and classified into Apps and Products. The Apps page lists non-Chinese alternatives across 17 categories, including Social, Chat, Shopping, Scanning, Office, Music, Browser, Games, News, Security, Finance, Mail, Utility, Video Calling, File Sharing, Video Editing, and Photo Editing. Users can access the apps through a continuous scroll, jump to a specific category via the menu bar, or enter the app name in the search bar. 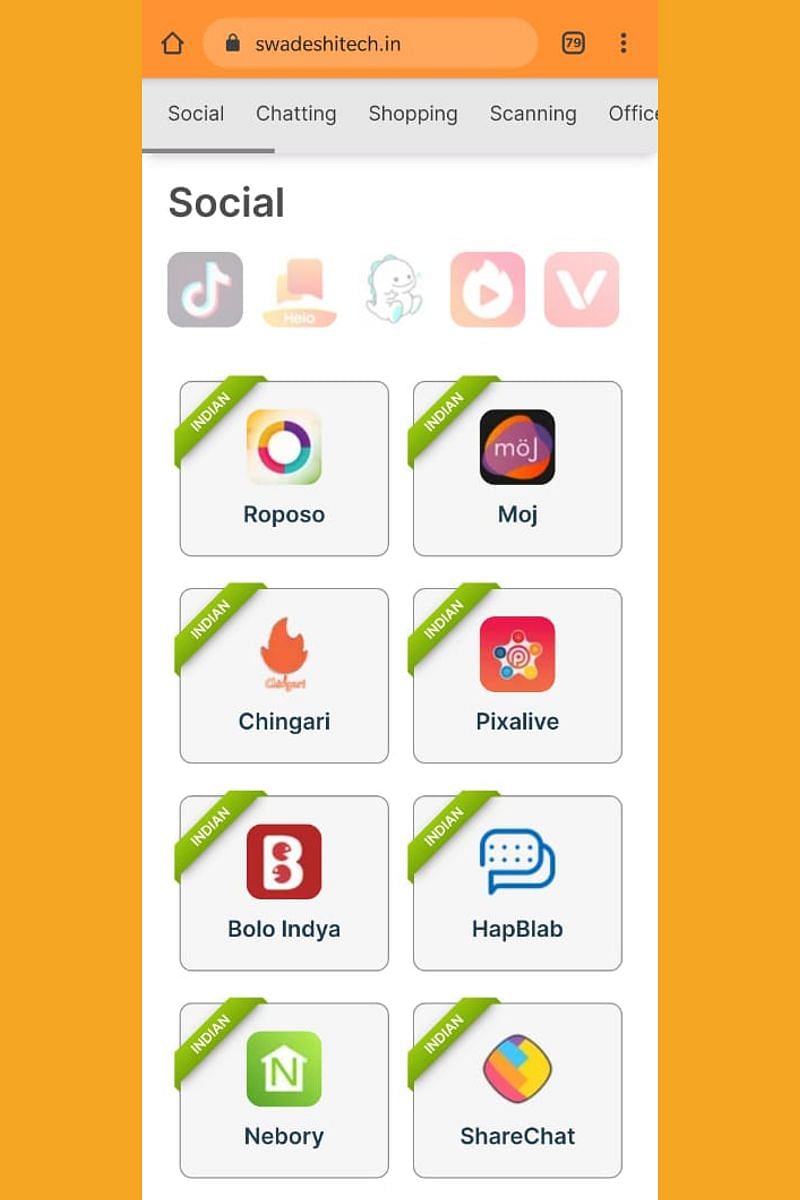 The founder says the decision to have category-specific lists came from a need in his school. “Our students would use CamScanner to scan notes and upload them. So, they  needed to find the right alternative before deleting that app. That is how we came up with the idea of category-based lists,” Chirag says.  Swadeshi Tech lists 87 alternative apps to 59 banned ones, and is adding new ones continuously. When users click on an app, an installation prompt shows up, which directs them to the download pages on Play Store or App Store.

Revenue and growth via ‘Products’

Some of the leading Chinese brands such as OnePlus, Xiaomi, OPPO, Vivo, Realme, Huawei, Motorola, etc., are being substituted with the likes of Apple, Google, Samsung, LG, Sony, Jio, Micromax, Nokia, Karbonn, Lava, and so on.

The Products page is quite nascent and static for now, but Swadeshi Tech plans to add shopping links to generate ecommerce revenues going ahead.  Chirag shares, “The Products page has a lot of potential and scope as the demand for local devices goes up. The government is also taking steps in that direction. So, we might add affiliate links to direct users to Amazon or Flipkart for purchasing the products they find on our site.” Swadeshi Tech also plans to donate its earnings to the Indian Army, which has been occupied at the Indo-China border since June.

Chirag says, “We don’t have too many costs since we’re just two people doing it all on our own. We’ve only paid for the domain. The money we earn will be donated.”  Given the anti-China sentiment sweeping across India right now, and the sustained push for local solutions from the government and the digital ecosystem at large, Swadeshi Tech is an idea whose time has come!