RCEP or not, India has to revive Plan process 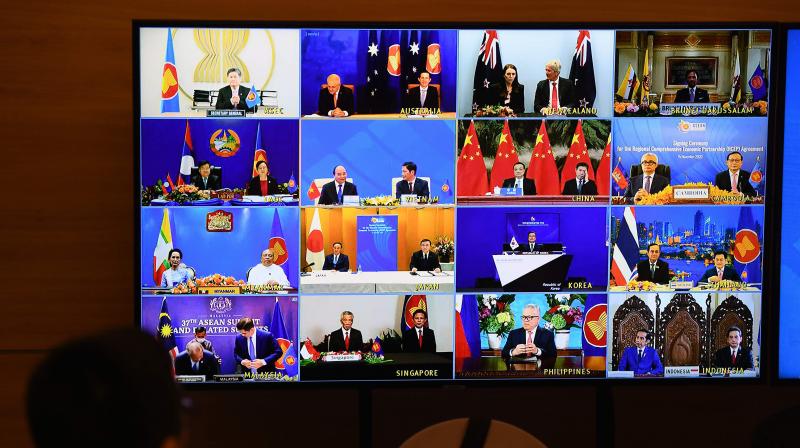 The country needs to reorient policies for a long-term approach without ignoring short-term needs. — Shivaji Sarkar

Keeping China out is the new trade policy of India. Its primary approach is that anything that opens the door to Chinese products is a “strict no-no.”  So it’s no surprise that India is keeping out of the Regional Comprehensive Economic Partnership (RCEP) free trade agreement (FTA), an initiative New Delhi was engaged in since its inception. Theoretically, it comes at a minimum cost as India already has FTAs with all but three RCEP members.

Home Minister Amit Shah had last month told RCEP member countries that they would have to come around to accepting New Delhi’s terms. “Considering India’s growing stature, RCEP members can’t afford to ignore it for long and will come around to agreeing to the Government of India’s terms. Meanwhile, the country has maintained successful economic relations with ASEAN by the means of FTAs,” he said. The RCEP, too, has kept the doors open for India officially, if at all it wants to join the grouping without having to wait for 18 months, as stipulated for new members. As per the RCEP’s decision, India can still participate as an observer.

India had taken the decision in November 2019 to keep out of the RCEP, with the partnership being seen as China-centric and due to the perception that it would boost sales of cheap Chinese products and harm the country’s industries.

India’s approach on the deal is the result of unfavourable trade balances that it has with several RCEP members, with some of which it already has FTAs. The Commerce Ministry says that the Compound Annual Growth Rate (CAGR) in trade with such countries was a mere 7.1 per cent. India has trade deficits with 11 of the 15 RCEP nations. This means that while the partners have access to our market, India has not penetrated theirs. Hence, it cannot further open up its market for the advantage of others. Still India has agreements with the ASEAN, South Korea and Japan. It is negotiating deals with Australia, New Zealand and Singapore and there are treaties with Nepal and Bhutan. However, there are apprehensions that RCEP could impact the Australia-India-Japan network in the Indo-Pacific region. India and like-minded nations, particularly the Quad countries — Australia, the US and Japan —  are keen to have resilient supply chains. Along with New Zealand, South Korea and Vietnam, they are negotiating with each other.

External Affairs Minister S Jaishankar, while delivering the Ramnath Goenka Lecture in 2019, had said that India’s stance was a “clear-eyed calculation” of the gains and costs of entering a new arrangement. He also said that India would continue with its “act East” policy. It should also be remembered that the RCEP decision is linked to China’s aggressive postures in the South China Sea and on the Line of Actual Control, including the June 15 Galwan incident in which 20 Indian and many Chinese soldiers lost their lives. It may be recalled that Jaishankar even in January had said that New Delhi’s doors to RCEP were not closed. But in September, he said, “You cannot be a rising power without being a rising economy, and to do that you have to build your domestic capacities.” His views are not very different from that of the Swadeshi Jagaran Manch, which had been opposing most FTAs and stressing on improving the domestic economy.

It certainly has not been an easy decision. India would have to weigh the gains of a bulk agreement and individual treaties. A similar concern was expressed when New Delhi chose to opt out of the Belt and Road Initiative (BRI) in 2017. It was said that India might be isolating itself. Now after three years, like-minded democracies appreciate New Delhi for its prudent decision, which many now see as an exploitative Chinese diplomacy. Significantly, many members are not enjoying their stay in the BRI. There is the contrary view as well. It says that India’s economic decline occurred even as China’s economically and strategically important BRI went on to cover two-thirds of the world’s population.

Beijing dominates the psyche of policymakers. India is highly dependent on China for imports of lithium ion batteries, antibiotics, personal computers, colour TVs, solar cells, toys and so on. Despite the recent initiatives by the Centre to improve domestic production in many of these goods, concerns remain.  What China has done is to consolidate its economy since 1979. Thus, production cost is minimum and it has a pricing mechanism that happens to be the lowest in any country in the local currency.

India has to learn the technique of creating a vibrant domestic system with a market across the world. Chinese merchandise today decides international prices. While India successfully blocked imports of idols of Ganesh, Lakshmi and other deities, it could not succeed in lowering the prices of  “Made in India” products. This cannot be considered good economy. Possibly for this reason, China looms large in reports submitted by eight Groups of Ministers (GoMs) formed during the ongoing pandemic. These GoMs have called for a balance between supporting economic performance and geopolitics and most have focussed on ways to counter China. They call for contextualising issues like Chinese aggression on communication tools, need for specialised spokespersons on issues like China and the environment and many other dependencies on Beijing.

The obsession with China is too apparent. Of late, despite all efforts, New Delhi’s policy approaches are China-centric. India may have to revive the planning process it gave up in 2014 as the NITI Aayog has not been a proper replacement. The country needs to evolve a long-term policy prescription. India has to consider moving out of the growth-centric approach and replace it with progress. So RCEP or not, India has to have a holistic approach towards the economy. It needs a wider vision and approach for progress and has to imbibe policies that could give it an edge. India needs to reorient policies for a long-term approach without ignoring short-term needs.

(The writer is a senior journalist)